Why I Wanted the Charge Tank Over the Power Tank

After having owned two electric bikes that could only be charged at home I know firsthand the importance in having the ability to charge away from home. Imagine a smoker car/bike that you can only fill up with gas at home. That is how it was not being able to charge my bike anywhere but at home. Sure you might ‘think’ you can find 110v outlets anywhere to use. Ever tried to find those? Starbucks? If you want to take out your 28+ pound battery, lug it into the store, plug it in with the loud ass fan and charge it. The reality is 110v outlets are not that convenient when you need them. And it’s not like charging your damn cell phone at a coffee shop. At least not a Cake or Sur Ron Light Bee battery.

Need is the motherhood of invention so I figured out a way to charge both my Cake and my Sur Ron at level 2 EVSE charge stations using a J1772 to a 5-15R cable. The 5-15R is the type of cable that plugs into the wall outlet for things like your computer, your printer, hairdryer (if you have hair) your normal household stuff. So as long as the charger I carry for either bike can handle a 220v input I’m golden. And it works well.

But I was limited to the amount of juice the charger would accept at 110v even though I’d be hooked up to a 220v EVSE line. It does not double the charge input; it simply means that the charger can accept dual voltage, either 110 or 220. So the same amount of time it takes to charge at home would be the same at an EVSE station.

Combining the Charge Tank with the On Board Charger

This is the response I received from the Zero engineer about using the 110/220v onboard charger in tandem with the Charge Tank. 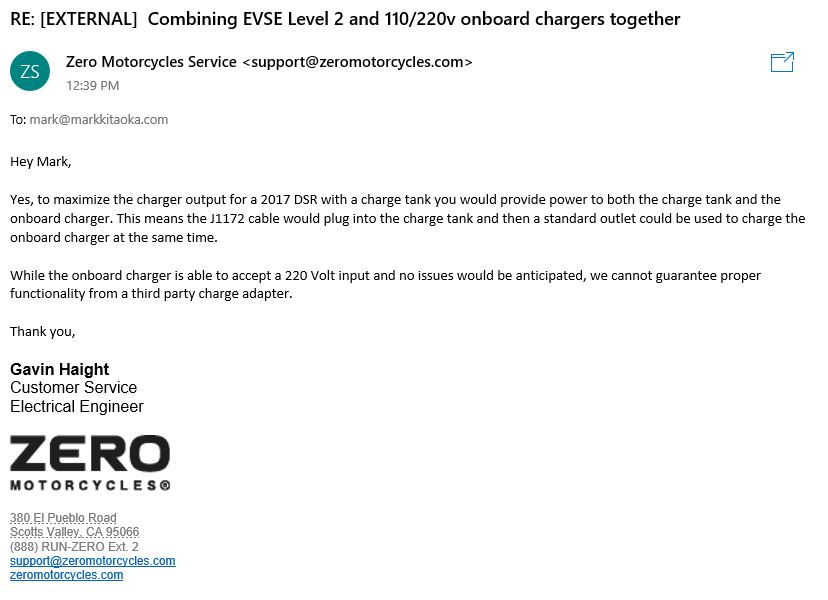 My J1772 plug to C-13 connector which is the connector I plug into the Zero’s normal household charging port located in the left side of the frame to add 1.3kW when charging at EVSE stations. For those who chose not to have a charge tank this would work stand alone, but only charge at the same rate as you’d get at home. As an example my bike would take around 8 hours to charge from dead only using a 110/220v outlet connection. If you don’t have a charge tank it’s great in a pinch though…. Finding 110v outlets was not easy when I searched. EVSE stations are much easier to locate.

The very first time I charged the bike at an EVSE station is after I picked it up and rode it home. The distance from SF Moto to the Charge Point EVSE station which is 1.5 miles from my home is 22.5 miles. I left the shop with 100% battery and arrived at the EVSE with 71% remaining having used 29%. My average rate of speed was between 70-85 MPH on the freeway which comprised 90% of the trip. I was in Sport Mode the entire time. 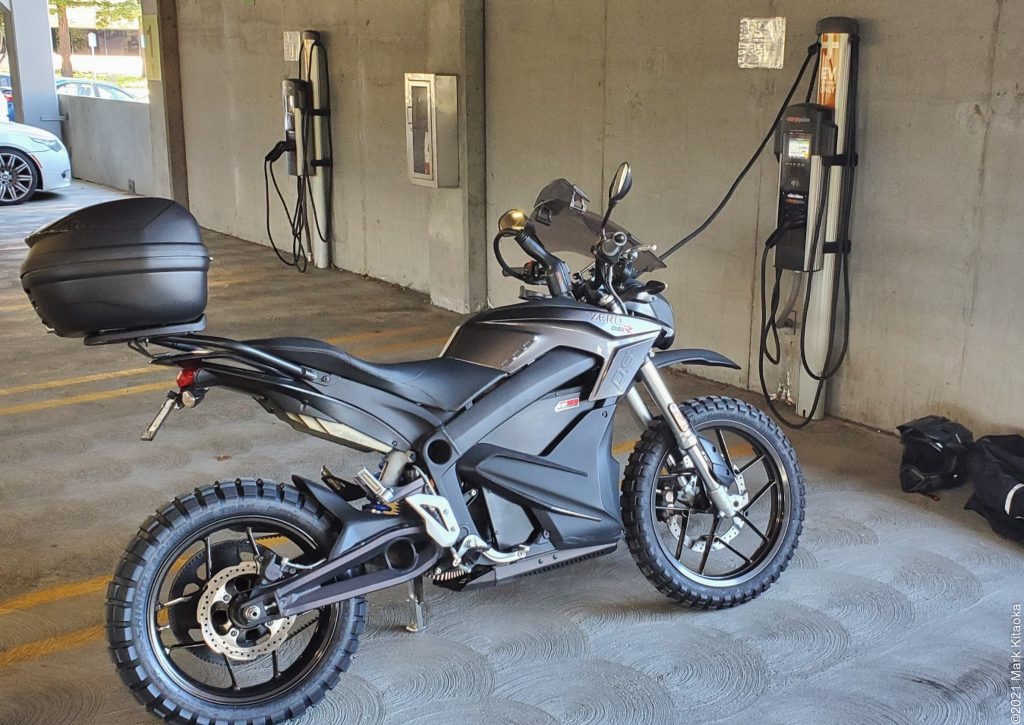 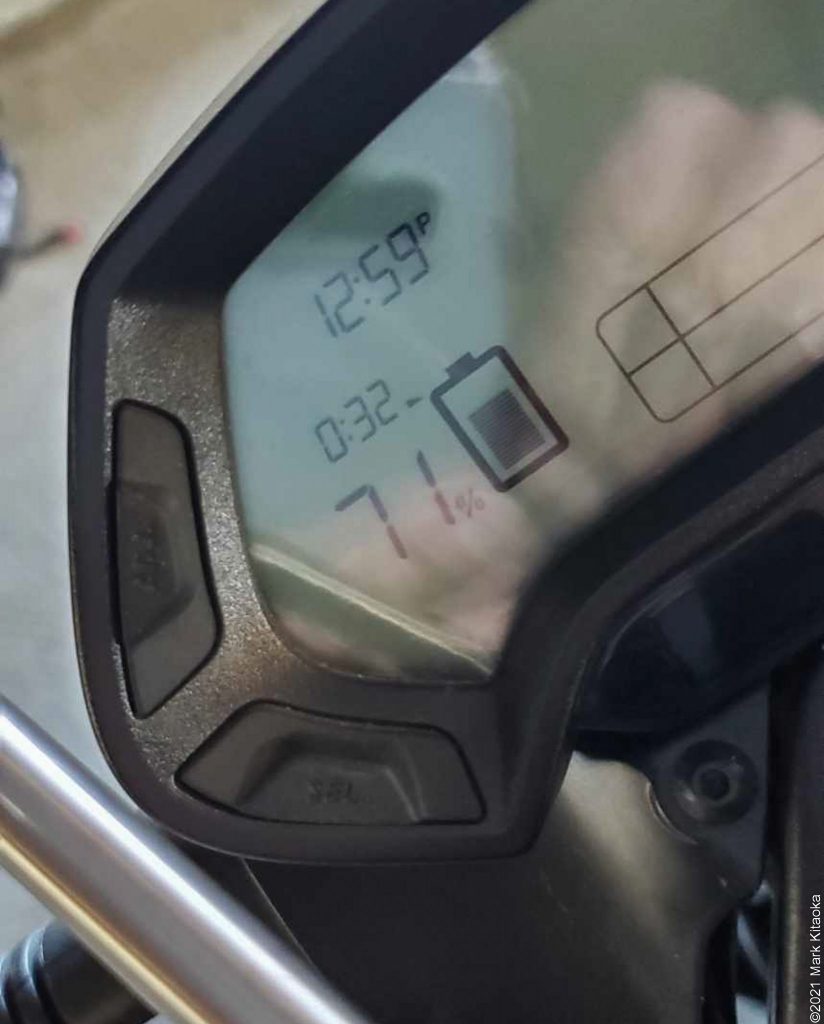 Keep in mind I rarely charge to 100% while I’m out and about. EV batteries charge the quickest from 0-80% and then slow down from 81-100%. I can see the kW charge rate drop on EVSE charging stations once the bike reaches 80%. Most of the time I end up charging when the bike hits 15-17% of charge and it takes just under one hour for me to get to 80-85%. Enough time to grab some chow, hit the head and look around. When I get home I simply park the bike and plug it into my 110v household outlet in the garage. Zeus charges at the normal 110v rate and at night before I hit the rack he’s at 100%. I unplug the bike, say goodnight and the next day I’m ready to ride. If I ever want a Charge Tank capable home charger I’d just purchase a 220v J1772 plug and use the empty 240v socket meant for an electric dryer in my garage. My dryer uses gas. Easy.

I carry an extra 110v charging cord in my swingarm. I call it ‘my spare tire’ because I only have it there for emergencies. One day I decided to try it away from home. I asked a local business if I could plug my bike into their outdoor outlet to get some charge. Not only did they agree, but they came out to view the bike and ask a ton of questions, intelligent questions, not the usual “How Much, How Far, How Fast?” I find questions like that come from people who have no real interest in the bike. They just like to justify why they don’t like it and would never purchase one. Trolls. So now my standard answers are:

Why those answers? Who cares, they don’t. I’m not a Zero salesperson. And they are not interested in buying one.

It Ain’t No Perfect World

Even though there are 10x more EVSE stations here in the Bay Area then there are gas stations, by no means will I ever say that this emerging EVSE world is anywhere near perfect. Because this is so new there are way too many different EVSE companies all vying for a piece of the new pie. EVGo, ChargePoint Eaton Efacec Blink Volta just to name a few. At least EVSE level 2 charge stations all use the same J1772 plug which is the one Zero has adopted for their Charge Tank. And I’ve visited EVSE stations where the charger is out of service, only available to residents, employees, etc. Then there are EVSE stations that have a broken J plug that has either been misused or vandalized. I have occasionally seen EVSE stations “ICE’D” meaning a smoker car has parked in the EVSE stalls for a variety of reasons. One they can’t read, two the don’t know how to read or three they are just being pricks. But having a motorcycle makes it easy to park between their driver’s door and the car next to them and plug my bike in.

EVSE Stations Set Their Own Prices

Make no mistake some EVSE stations whether they are of the same brand or not establish their own prices for charging. This is no different then how gas stations operate. One Chevron or Arco station will have a price for a gallon of regular unleaded. Three blocks away the same brands will have different prices. How EVSE stations charge is different than gas stations. Some charge a flat rate by the hour, others don’t charge for the juice but for parking. Some don’t charge at all. In order to find out what you may or may not get charged it’s always wise to check Plug Share to see what’s what.