My First Day of School

My First Date with a Zero

I’m the guy who can often be found eating dessert before the meal or breakfast at dinner time. So I’m going to start off by saying the Zero DSR is an incredible experience. There, saved everyone loads of time. Haters can start bitching right away and fanboys can say I told you so. Simple – no need to read further since you can get into arguing right away. Since most guys have the patience of an adolescent erect penis you can be instantly satisfied knowing that ‘you were right’ which we all know is so damn important. Just read forum posts for validation!

First off I want to make it clear that this review is of my recently purchased used 2017 Zero DSR which I purchased in March of 2021. When I took ownership the bike had 9023 miles on the clock by one previous owner. The VIN searched revealed a clear title, no reported severe damage or accidents. At the time of this article I have only owned the bike for five weeks, putting 600 miles on the clock, a combination of riding 70% on road 30% off road.  By no means is it my final thoughts, simply my initial new owner observations.

The SF Moto store owner allowed me to test ride this bike even though they normally do not allow test rides of previously owned motorcycles, which I completely understand and agree with. BTW this was the VERY FIRST TIME I have ever been allowed to test ride a motorcycle at any dealership, smoker bike or electric. Zero dealers allow test rides on Zero demo bikes which they supply to their dealers. And I have (meaning had) personal rules. Buy motorcycles new, cars used. So that first rule went into the toilet.

My experience coming to this point is what I refer to as “in the middle” of the ICE(smoker)/EV world. First I only rode ICE purpose built bikes, Penton (now KTM), Bultaco, Maico and Yamaha – and only two strokes when 6” of front end travel and 4” was trick. Oh and no water cooled dirt bikes, only air cooled. I loved the look of a sunburst head – so cool looking! Then four stroke street bikes, Kawasaki 500, Honda F4s, VTRs and finally my RC51.

I have owned a Sur Ron Light Bee since 2018 which is what got me into the electric motorcycle world. In 2020 I purchased a Cake Kalk& and due to several problems the final straw being a bad battery and the company not being able to fix/loan me a battery for 40 days I came to a deal with Cake and returned the bike. I’m so happy I did.

Like most everyone I scoured YouTube videos and Google about the Zero line of bikes. 99.9% of them mentioned the following topics:

Uh no shit! LOL And almost all of the information I see/read are from demo rides use moving selfies, AKA GoPro videos which for me is akin to the days we’d get invited over to friends’ homes to watch 8mm home movies of their recent vacations. Uh OK I understand that those movies are interesting to THEM because it’s about THEM, but my god let me outta there! Kinda the same for me of FPV ride videos, they are all the same give or take the audio editorials. (yet they ALL talk about no clutch/shifting, over and over…) Can we PLEASE talk about something else? I am wise enough to know that demo rides, or being loaned any bike is way different than actually owning a bike. So to be clear I’m talking about a bike I own, bought with my own after tax money during COVID19.

After discovering the sheer joy of an electric motor through riding my Sur Ron for three years and 6.5k miles (all recreational, no commuting) I fell in love with its lack of maintenance, instant torque and quiet nature. It was then I (mistakenly –ah hindsight) decided to spend 14k on a Cake Kalk& since it is fully homologated in the USA meant (or so I thought) I could ride to off-road areas and do some – duh off road riding. The problem? Riding TO an off-road area where I live meant traveling about 14 miles each way at an average speed of between 40-50 MPH. At sustained high speed electric engines suck down juice like there’s no tomorrow. Much of that juice is wasted on overcoming the non-aerodynamic nature of us – our non-aerodynamic human forms. In addition in part to a very limited range (32 miles) I no longer own a Cake primarily due to a battery failure the company could not resolve after 40 days where the bike was a brick.

This Is What I Wanted

So between those two lightweight ‘motorcycles’ I learned a ton about what is important to me and what I truly want in a 21st century electric motorcycle:

Ok so I can wish! Hell even new smoker bikes don’t meet 95% of my wishes…

As I searched for Zero motorcycles I was struck by the fact that they are sold through dealers. You know the kind that formerly existed in the world. Brick and mortar locations which means I’d be supporting local businesses instead of buying a bike via the Web. Wow! So SF Moto in San Francisco had the exact bike I was looking for – A Zero DSR with a Charge Tank.

Buying From An Actual Dealership!

I took delivery of my bike from SF Moto in San Francisco. And I’m talking about old school dealer memories. There are loads of bikes on the floor, sales people that are not on commission, racks of helmets, jackets and boots, a parts and service area from days past. Heck the only thing missing from back in the day is the massive tire ash tray filled with cig butts on the parts counter! I had them install new tires, a Givi top box, a Tidy Tail and the Zero 12v accessory socket. These were all things I was going to change myself, but since I had to wait for the tires to arrive I just went ahead and had SF Moto install the items. Felt good to support a local business too since EV bikes don’t take nearly the amount of maintenance of a smoker bike. His name is Zeus. 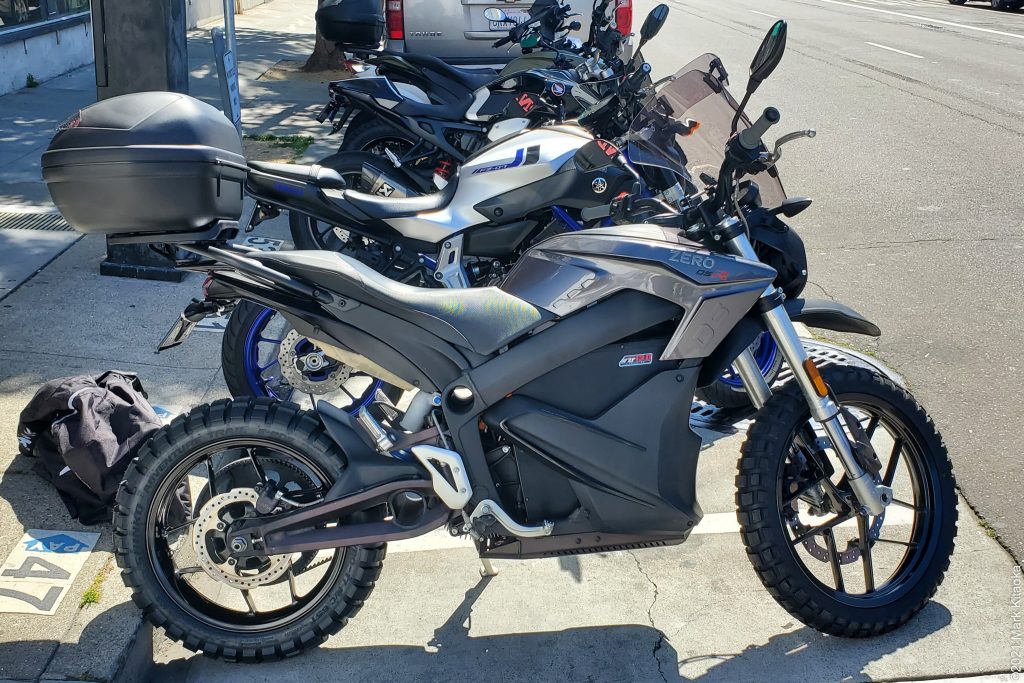 And three weeks after I picked up my bike I get this in the mail: 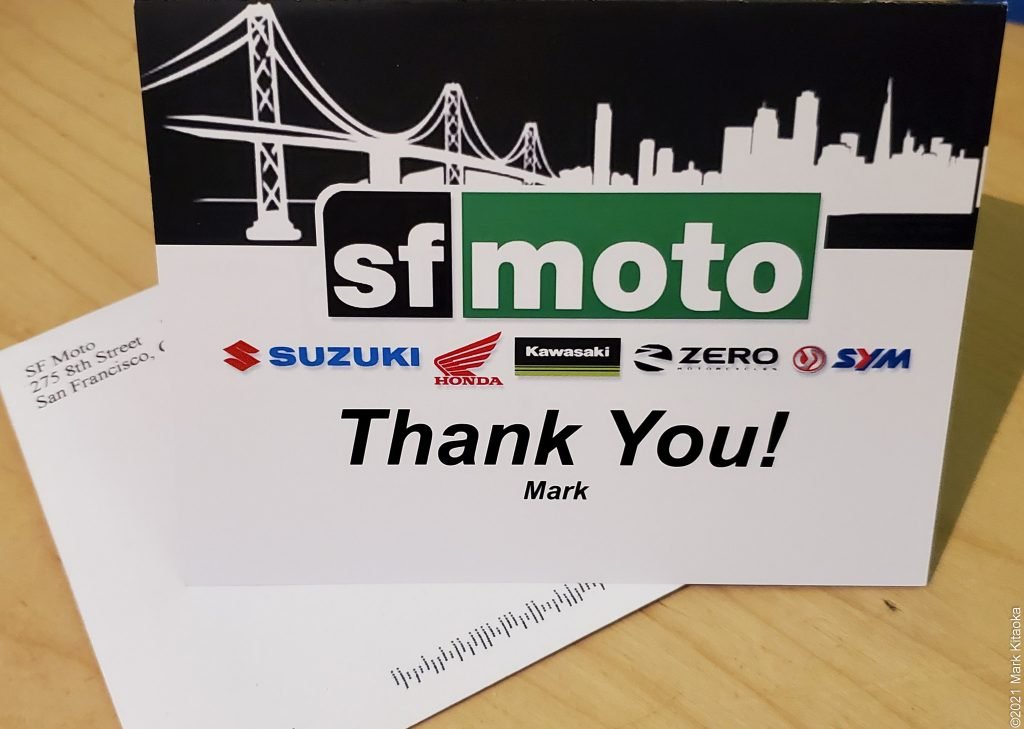 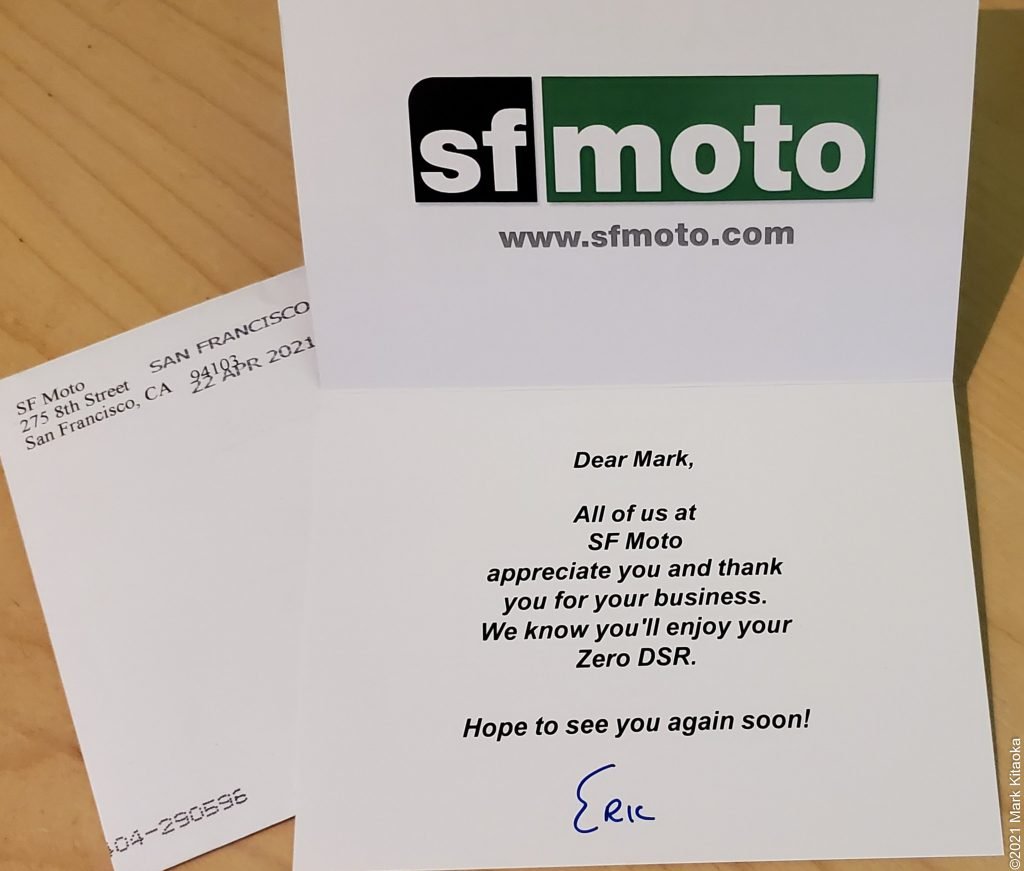 Yep, old school the kind of gesture I so appreciate. Eric is the owner of SF Moto. 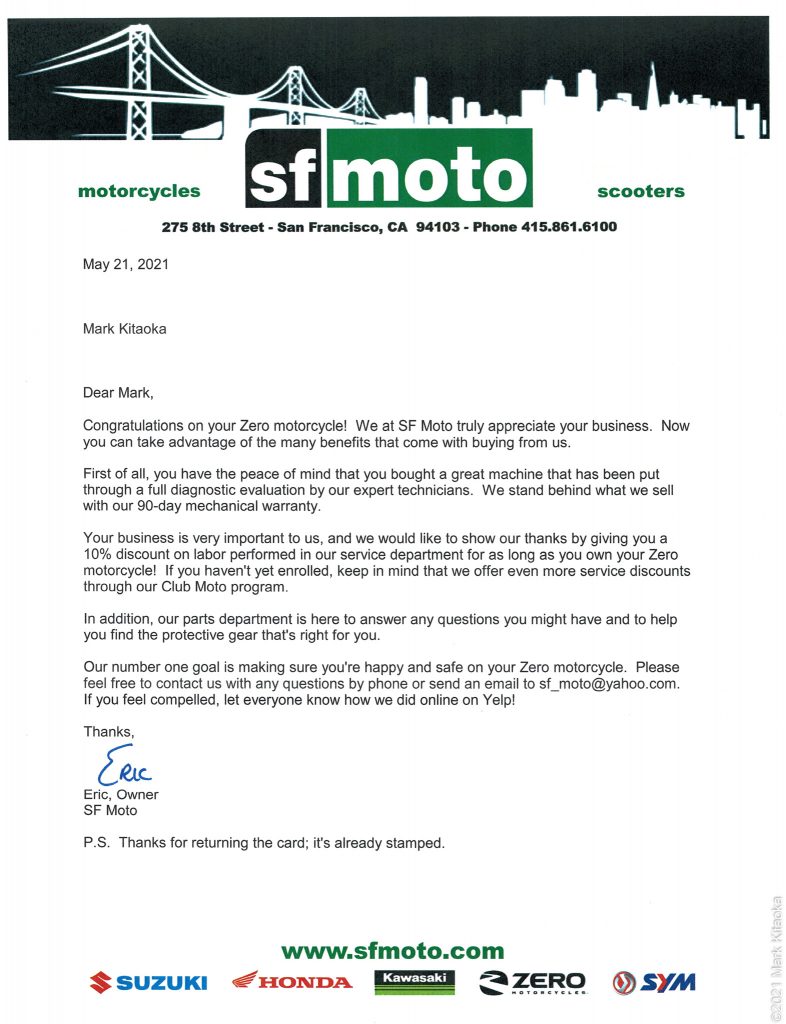 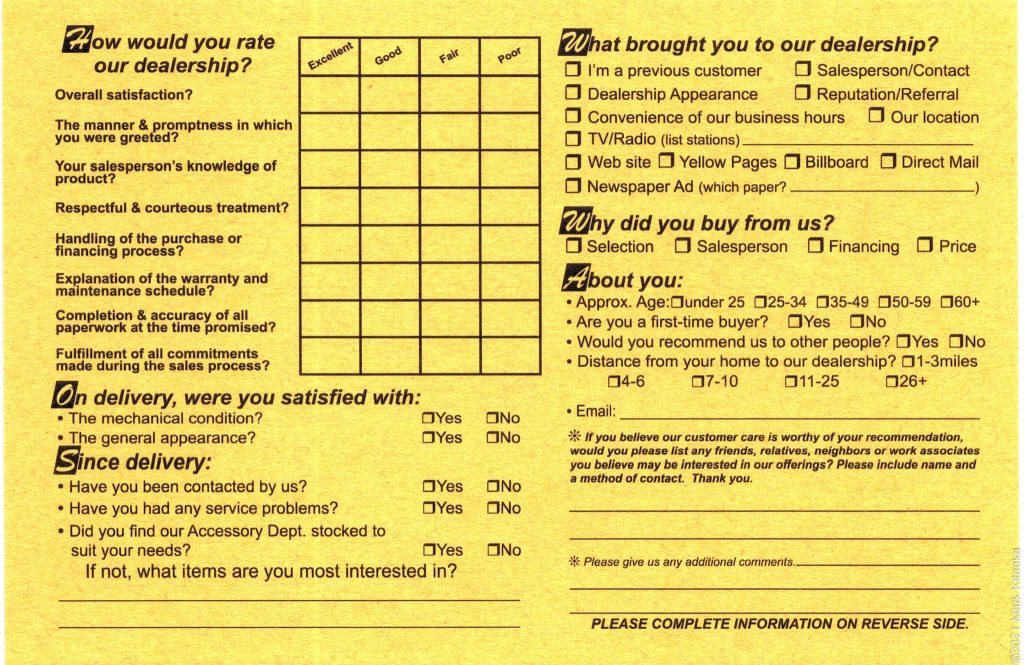 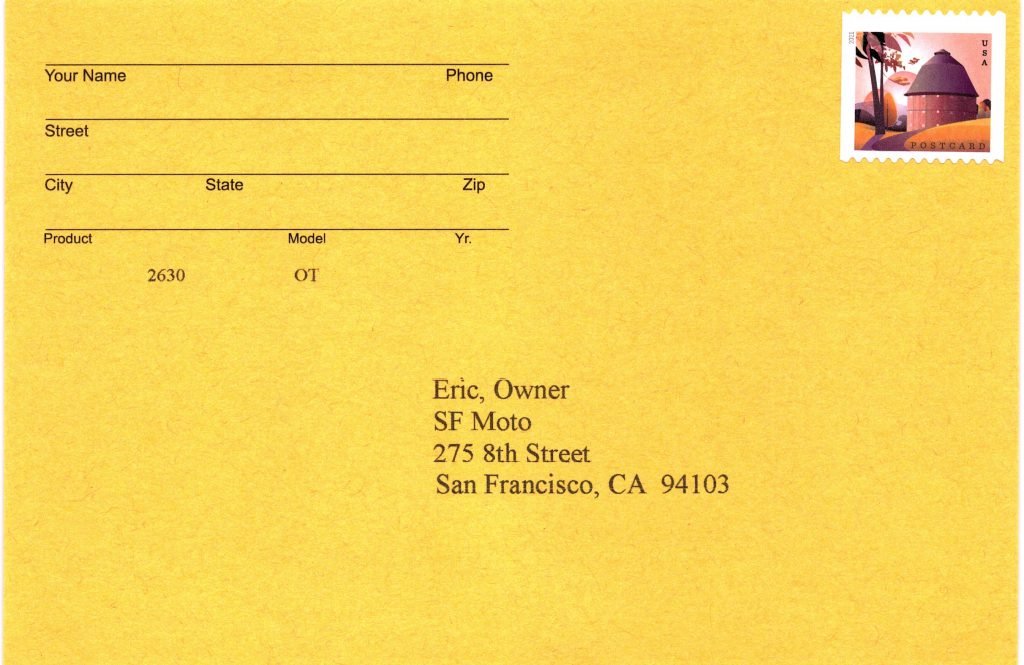 Am I impressed? Oh fcuk yes I am!

I’ve covered as much as I can with ownership for a little over a month and outlined some areas I’d like to see Zero expand on the bike, better regen, and proactive firmware update notification and two custom modes. I’ve sighted some items on my wish list too. I was very impressed to buy my bike from a dealership since my prior EV two wheel purchases have been over the internet with no face to face contact. I do understand that some people have not had the stellar service I have experienced with SF Moto. If Zero did open the option to sell their bikes to any dealership who wanted to do so I have no knowledge of the reasons. I can guess that they wanted to enter the realm of brick and mortar sales without going through an entire brand/retail/real estate/leasing exercise. But just like my smoker bike experience in the past, dealerships can vary greatly in their level of service and knowledge. We use to look for “Honda/Yamaha Authorized Service” before even considering a motorsports dealer.

This is a whole new emerging world and even though I don’t think of myself as an early adopter of two wheel EV bikes I guess I am. There are teething pains in any new technology especially one that is poised to replace something that has been around for a hundred years. For the most part people resist change and I can think of many examples just in my lifetime. ATM Cards, Glock plastic hand guns, VHS video tapes, Walkman portable tape decks, compact disks, microwave ovens, personal computers, heck even cell phones. But moving forward is inevitable even if it takes some of us kicking and screaming along the way. Are Zeros or any EVs completely there yet? Oh hell no. Batteries and the infrastructure to support them are just in its infancy. Are Zero’s too expensive? $17,990.00 for a 2021 DSR with a Charge Tank is beyond my threshold of financial pain especially for a non-essential luxury item, but not for some. Then again a $15,349.00 Freeride snowmobile or a $16,000.00 Jet Ski causes me too much pain to buy. And then I’d have to buy a truck or trailer to haul those things too. And just how often would I ACTUALLY use those? Hum….

Since I’m a commercial photographer of course I’ve created some images of Zeus. Handsome AF fella! 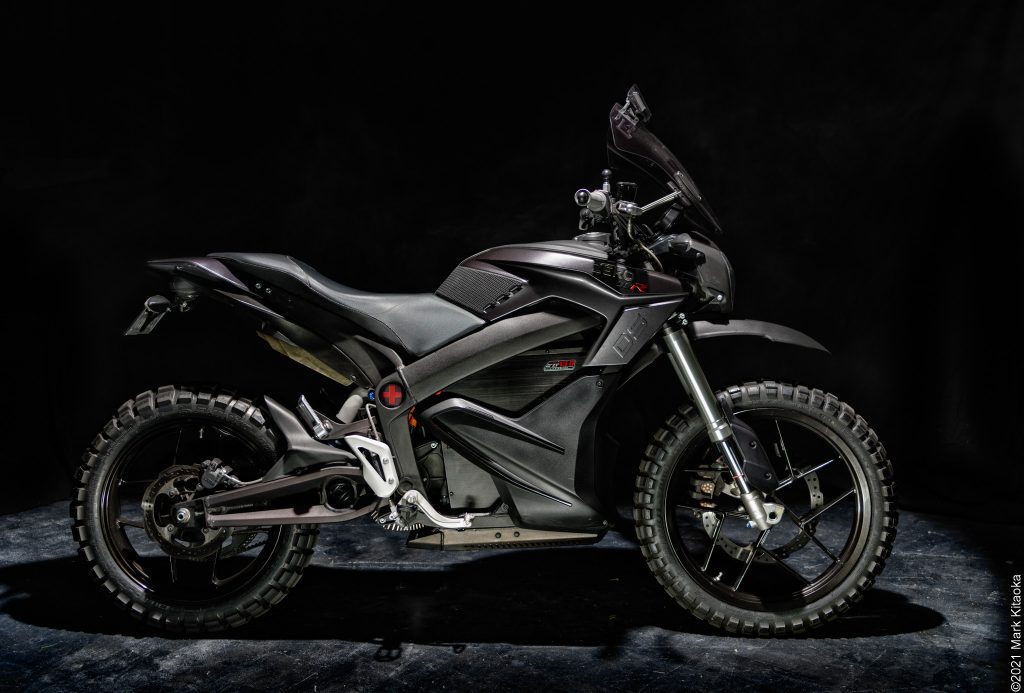 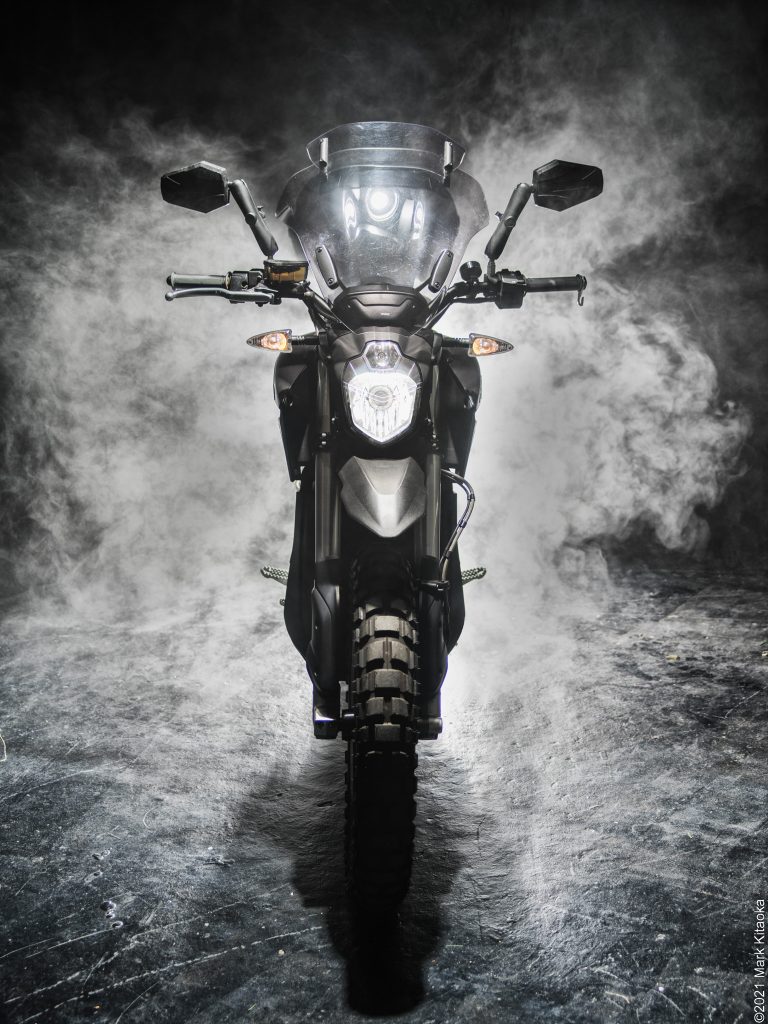 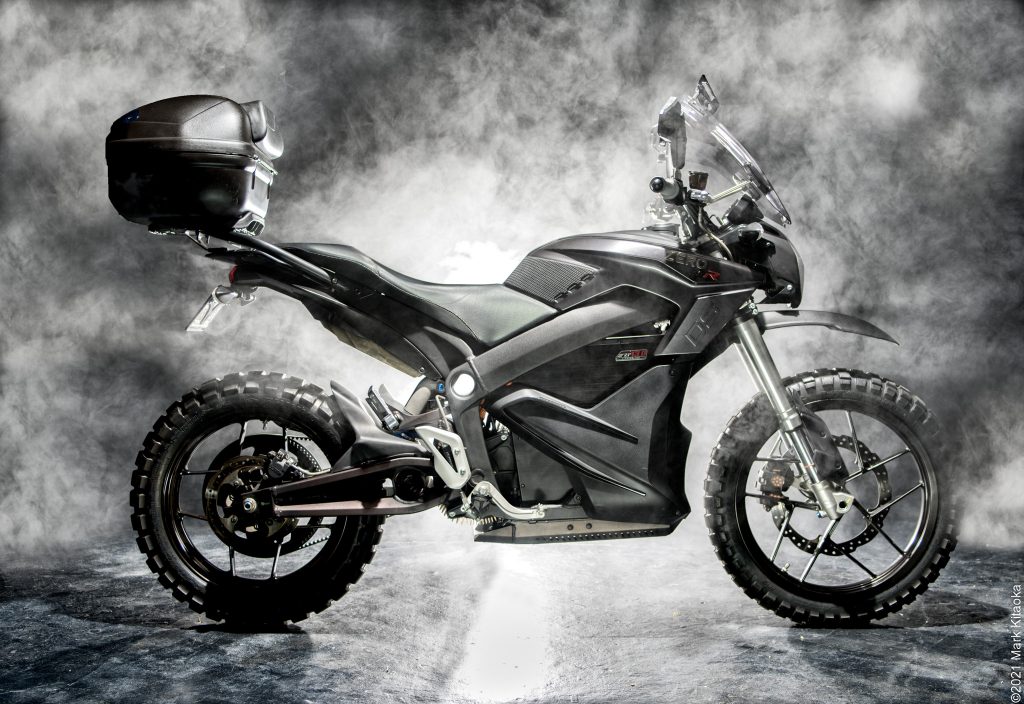 And a few BTS shots of how I created these images. I’m not a Photoshopper since I like to create the environment in camera…. 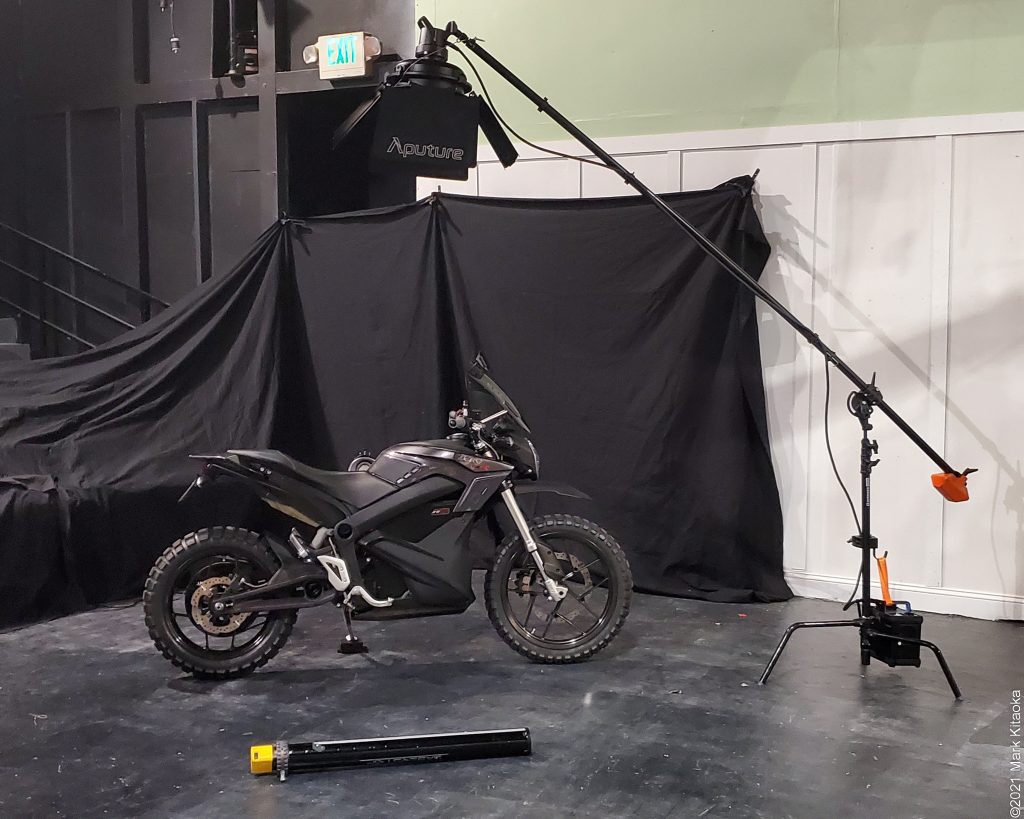